Twitter, following in the same steps of Google, Facebook, Yahoo, and other big technology companies, published statistics regarding the diversity of their workforce. 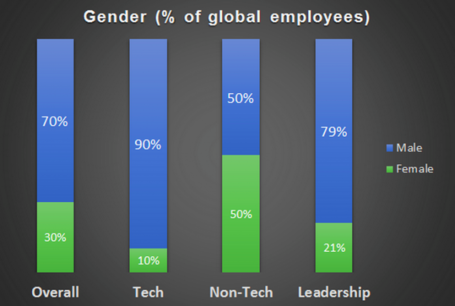 As I would have guessed (and have observed in real life), most tech companies are (disproportionately, relative to the ethnic makeup of the United States) comprised of White males, especially in technical fields.  Across the board (at Google, Twitter, Facebook, and Yahoo), only 1-2% of technical roles are filled by Black workers.  One would think that under ideal circumstances, the workforce makeup would somewhat resemble the ethnic makeup of the United States.  There is obviously a gap somewhere, whether it be societal barriers, education, achievement gaps, cultural issues, racism, access to resources, etc. I’m curious, for my Black brothers and sisters in tech that I have met (I do know quite a few), how do they differ, what did they do differently, how was their upbringing different that provided them the opportunity to work in technology, what decisions did they make, what barriers were or were not in their way?  For myself, my path to a software engineering career resembled:

With all that said, I have brothers and classmates who have had similar experiences growing up, but aren’t in tech all.  There are others who’s experience was different and they are in tech (I’m sure there are some key similarities between their and my experience).  I’m not a sociologist by any means, so I can’t speak to society at large.  I can only hypothesize answers to some of the questions below:

These are all questions (and I’m sure there are more) that I would really be interested in legitimately having an answer for.  I’m excited that this discussion is happening and hope it’s the first step of many in increasing diversity in STEM because all things being equal, I believe a more diverse workforce is a better and more competitive workforce and makes for a healthier society.